NewTek President and CTO Dr. Andrew Cross shares how NewTek’s latest product, “TalkShow,” has transformed the meaning of a broadcast show. In this interview from the 2015 NAB Show, Steve Waskul and Andrew discuss the mechanism and meaning behind TalkShow, and are later joined by a third participant to demonstrate TalkShow’s capabilities live.

As the conversation begins, Steve opens with, “So what is new in the world of NewTek?” “Gosh,” Andrew smiles, “We’ve got a lot of cool stuff.” NewTek’s goal has always been to revolutionize the world of broadcast, he explains. Andrew believes that most people are very invested in seeing their kids or grandkids on the TV or web, but are used to Super Bowl quality production. So for NewTek the question has always been, “How do we get that level of production down to the level that anybody can do it?”

Excited by the solutions NewTek has brought to NAB this year, Andrew shares their latest development with us: TalkShow. A collaboration with Microsoft, TalkShow “basically allows you to bring Skype calls into a show, Andrew explains. Looking at it on another level, Andrew believes TalkShow is transformative because it allows for a much greater interactive experience for the audience.

“Traditionally with Tricaster,” Steve interjects, “I could have used Skype or something and brought in someone with a monitor… but I wouldn’t have had any control over the quality.” Nodding, Andrew agrees that this method wouldn’t be a realistic solution. Working with Microsoft to develop TalkShow has given broadcasters a solution that will allow them to bring high quality Skype calls into the show, he asserts.

And you’re able to do color corrections? Steve inquires. Yes, Andrew explains how their product allows you to color correct incoming Skype calls, “something that was really difficult to do with traditional means.”

If the Internet bandwidth drops out, Steve wonders, are there provisions in place to allow the interviewer to continue? Over the past 15 years, Andrew divulges, Microsoft has figured out how to uphold the integrity of the interview even with low bandwidth while also keeping the latency low. “If you’re out in the middle of the desert trying to broadcast,” he concedes, “What will happen is the interview will eventually fall down to audio and a photo will be displayed of the person calling in.”

Thinking about the possible applications for education, Steve insists that the collaboration between students of different states or countries will be amazing. Smiling in agreement, Andrew marvels that our kids will be able to “exist almost anywhere with products like this.”

Moving in a new direction, Steve shares that StudioXperience is currently utilizing the “TalkShow Magic Box” as well as two Tricaster 8000s in their workflow, and would like to know if they can bring someone on the show. Smiling, Andrew says that Anna Castro is ready to come aboard.

At this point, Anna appears via Skype and introduces herself. “A lot of people don’t believe she’s really in San Antonio,” Andrew laughs, “They’re saying the quality’s so good, she must be in the back of the booth!” Holding up a copy of today’s San Antonio Express News, Anna confirms that she is really in San Antonio. Before this kind of quality would have required a satellite truck to be set up before the show, Andrew explains. “This is so game-changing for so many broadcasters,” he beams.

So what’s happening on Anna’s end? Steve asks. In reply, Andrew explains that Anna should see them as well as know when she’s live via highlighting on her screen. Adding to the conversation, Anna explains that she just has her camera set up with Skype and TalkShow open.

“Well thanks to you, your team and your Tricaster product,” Steve shares, “Waskul.TV is now broadcasting in 164 countries live from NAB.” “That’s amazing,” Andrew smiles. Steve continues by sharing how his father worked for ABC TV in 1953, so he’s grown up in that environment. Seeing how technology has enabled the kind of broadcasting available today is astounding, he shares. “We’re so proud to be a part of that,” Andrew enthuses.

“So are there different levels of TalkShow?” Steve wonders. No, Andrew says, explaining that their goal is to be able to get the technology into the hands of their customers. “For a few thousand dollars,” he insists, you can cut the cost of all the other once needed things, like satellite trucks. At this point, Anna leaves the conversation and Andrew shares that the interest level for TalkShow in the marketplace has “really exceeded our expectations.”

“Let’s say you had four or five people you’re bringing in, like a normal news program… do you just use them as inputs on Tricaster with HDSDI and switch between them?” Yes, Andrew confirms, adding that you can use them with other switches as well. “With NewTek equipment,” he continues, “We have the ability to send the video between the TalkShow and Tricaster over IP, so you don’t actually need to hook up an SDI cable.” Andrew explains that they just have to sit on the same network and the connection between the two should occur automatically. Furthermore, you’re able to select which TalkShows you want to view and the Skype participant on the other end will automatically get notified that he or she will be on or off the air. “Those are important cues that go into making a show work well,” Andrew finishes.

Are there ways to pre-cue participants? Steve inquires. Absolutely, Andrew agrees, explaining that they actually pre-cued Anna before she joined their conversation. The control software TalkShow utilizes, he continues, allows you to dial people ahead of time so they are prepared to go on air. “You take them onto the air as you need.”

So is there a way for the producer to know the degree of bandwidth connectivity each potential caller has? Steve wants to know. Yes, Andrew confirms. “The software gives you a full diagnostic log of the number of TCP hops between you and them, the total bandwidth, and what the resolution is.” Essentially the producer can ensure optimal quality.

As their conversation closes, Andrew shares that this NAB Show has been particularly exciting for him because “it’s just so cool to see how things that you work on and you think are important end up helping change other people’s lives.” 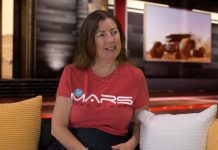