Razer Head Gamer and CEO Min-Liang Tan shares his passion for gaming and his insights into gaming technology with Steve Waskul.

He has been playing games for as long as he can remember and it is from his love of playing
games that the whole company evolved with a motto of “for gamers by gamers.” Initially the goal was to just design great products for Min­Liang and his friends to use to gain a competitive advantage when playing. They began by getting together to look at what it would take to build a better mouse so they could interact faster with the games. That initial desire grew into keyboards, headsets, and to an entire industry. Even today with hundreds of employees, the drive is still the same – to build things for gamers, as gamers themselves, that would bring more enjoyment and better performance to their gaming experience. He comments that, in a way, it was like the beginnings of crowd­funding in how the ideas developed for and by their own networks of friends.

But as the interview moves forward, Min­Liang talks about how Razer has moved over the last few years from user interfaces to building its own performance gaming laptops. He just wanted a gaming laptop but they were super heavy and super thick. So, he went to several laptop manufactures looking for something light, thin and powerful but was not satisfied by what he found. So, they brought in world­class thermal engineers, laptop designers and began a ground-
up design that has transformed gaming laptops to be thin, light and powerful. Min­Liang explains that during this process his team worked really closely with Intel. They found the engineers there to be really passionate about gaming and happy to get involved in Razer’s effort to help in the effort to build an ultimate gaming laptop.

single super thin, super light form factor. Steve points out that while great for gaming, such a system would also be great for running other applications as well, and Min­Liang expands on this notion explaining that the company has graphic designers, architects, animators and game developers all using the Razor Blade Gaming Laptop. The package is indeed impressive. Measuring just 0.7” thin with a QHD+ display, it has quad­core Intel Core i7 4720HQ processors running at 2.6GHz with Turbo Boost speeds reaching 3.6GHz and the latest NVIDIA GeForce GTX 970M graphics with 3GB VRAM.

The third major initiative Razor has is their software platform. They have 2­3 million daily users who are hard­core gamers that use the platform. So, Razer focuses on having a truly holistic, fully integrated experience for their customers.

To dive into the topic of full immersion, Steve brings up AR and VR technologies. “It’s everywhere here,” comments Min­Liang. It goes without saying that Razer has exciting news in the AR/VR field. Very close to a consumer launch, Razer announced their Open Source Virtual Reality (OSVR) platform that, as he equates, is like “the Android for VR.” It’s a software platform that works with all head­mounted devices (HMDs) that allows any content developer­ from individual creatives to large companies­ to interface different peripherals and output mechanisms for their HMD. Since the announcement in January, more than fifty top VR companies have signed on with OSVR to keep VR truly an open source.

Waskul then inquires of Tan, “From a gamer’s perspective, are you excited about playing games [with the current VR technology]?” Yes, because it’s about variety. “I love the PC because it brings the keyboard and mouse experience that I’m familiar with, but if I’m on the go, I whip out my mobile phone. So, the way I see it, it’s another platform.” Another platform that has the world buzzing. But, “gaming can only get more immersive…soon you’ll have smells or wind, and it’s not a matter of decades, but years and months,” concludes Tan. 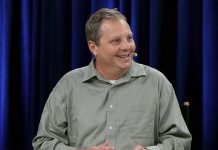