Warren Spector has been in the gaming industry for thirty one years. He joins Steve Waskul to take a look at where it’s been, where it’s going and to discuss how dedication to a team mentality has excelled his career and is a key component of the wisdom his team departs to their students at the Denius­-Sams Gaming Academy at the University of Texas where Mr. Spector is currently the Director.

Years ago, having eight to twelve people on a game development team was typical. Today, development teams working on AAA games can reach into the hundreds. Warren himself has worked on projects that have utilized the talents of as many as 800+ individuals. This growth has presented the industry with new challenges and opportunities for those with the drive to lead projects.

Warren begins his remarks with the assertion that “the industry doesn’t do a good job training leaders” and that many believe the pathway to leadership is dependent on luck. Because of this, one of his goals at the Denius­-Sams Gaming Academy is to change that mindset while ensuring that his graduates have the tools required to succeed in creative or management roles in the games industry, whether working for a publisher, an established developer or an independent start-up, on console or mobile, across a variety of business models. He feels, that leadership requires vision toward the end goal and understanding of the team’s capabilities as a whole.

Warren reflects for a moment about his long career in the gaming industry. “I’ve always been committed to telling stories,” he explains. For him, making games is not about the financial reward; it’s about “ensuring every player has a unique experience,” something akin to his first experience playing Dungeons and Dragons. Waskul asks if financial pressures increase as the project teams scale to being in the hundreds of members with significant resources being allocated to the productions. “I don’t feel it,” Spector ensures, “It’s about the end goal.”

This attitude carries on into the program Warren has developed for the students at the DSGA where his team helps students recognize humility­ and realize that each individual brings value. The skills of Leadership can’t be learned from lectures and it is through the methodology employed by his team that the students gain valuable hands-on experience leading teams with an emphasis on striving for the greater goal through teamwork.

It is interesting to note that each student admitted to the Denius­-Sams Gaming Academy either comes with a skill or some particular experience, and they are selected based on “team­ fit” not talent alone. Unless, as Warren puts it, a candidate is “so good that [he has] no choice but to accept [said student].” Once the admission process is completed and the students have been selected, they spend the next nine months in a rigorous atmosphere developing two games. Every two to three weeks they rotate positions so each person leaves with an understanding of the various perspectives, particularly the perspective of Game Directors and Producers. Spector describes that when they leave the program and enter into the industry (or re-­enter), students will be better prepared to climb the ladder much faster to become the creative and business leaders of tomorrow. Still, the base point for Warren is that leadership is based on humility and understanding. The attitude that there’s one, right way to do things must be dropped before the true leader in someone can emerge. “In every way, I think we’re doing something unique and different,” comments Warren on the DSGA’s approach to training game developers.

Moving away from the DSGA program, Waskul asks Spector “If you were looking at the industry and new things that seem exciting, what would you pick out as technology that makes a difference?” Warren replies enthusiastically that “the most exciting thing about games right now is that everything is happening in games right now. If you have a great concept, you have so many ways to reach an audience.” Which wasn’t the case five years ago. The fact that there are indie developers making personal art projects, large studios making monster console games, small developers making free-­to-­play mobile games, and pioneers developing augmented reality and virtual reality games all at once in the market astounds Spector. For Mr. Spector the heart of the matter is that games are being made, and being made via numerous pathways to reach wider audiences. To reach the audience, that is the beauty. 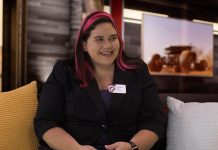